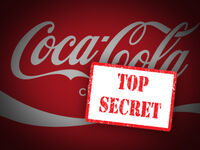 The Coca-Cola formula is The Coca-Cola Company's secret recipe for Coca-Cola. As a publicity, marketing, and intellectual property protection strategy started by Rober W. Woodruff, the company presents the formula as a closely held trade secret known only to a few employees, mostly executives.

Kosher Coca-Cola produced for Passover is sold in 2-liter bottles with a yellow cap marked with an OU-P, 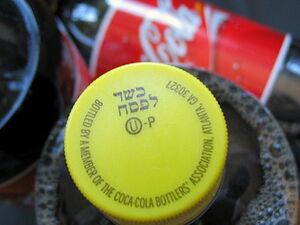 indicating that the Orthodox Jewish Union certifies the soda as Kosher For Passover, or with a white cap with a CRC-P indicating that the certification is provided by the Chicago Rabbinical Council. While the usual Coca-Cola formula is kosher (the original glycerin from beef tallow having been replaced by vegetable glycerin), during Passover Ashkenazi Jews do not consume Kitniyot, which prevents them from consuming high fructose corn syrup (HFCS). Even sugar-based formulas would still require certification of both the formula and the specific bottling plant, as the strictures of Kashrut on Passover are far higher and more complicated than usual kosher observance. This formula of Coca-Cola is also discontinued.

In the United States, there is strong demand from Latin-American immigrant customers for the Coke they drank

"back home", so Mexican sugar-based Coca-Cola in traditional countour bottles is sold in ethnic markets. In recent times, a cult following has emerged amongst younger Coke drinkers who believe this to be the pre-New Coke original formula. The company advises people seeking a sugar-based Coca-Cola to buy "Mexican Coke".

This recipe is attributed to a diary owned by Coca-Cola inventor, John Pemberton, just before his death in 1888. (U.S. measures).

This recipe is attributed to pharmacist John Reed.

Secret Formula on Display at World of Coca-Cola

On Dec. 8, 2011, Coca-Cola opened a permanent interactive exhibit at the World of Coca-Cola in Atlanta making the vault of secret formula visible to the public for the first time in history.

The secret formula was moved to the exhibit from a SunTrust Bank vault in downtown Atlanta where it had been housed since 1925. After Dr. John S. Pemberton invented Coca-Cola in 1886, the formula was kept a close secret, only shared with a small group and not written down. In 1891, Candler became the sole proprietor of Coca-Cola after purchasing the rights to the business. Then, in 1919, Woodruff and a group of investors purchased the Company from Candler and his family. To finance the purchase Woodruff arranged a loan and as collateral he provided documentation of the formula by asking Candler's son to commit the formula to paper. This was placed in a vault in the Guaranty Bank in New York until the loan was repaid in 1925. At that point, Woodruff reclaimed the secret formula and returned it to Atlanta and placed it in the Trust Company Bank, now SunTrust, where it remained until its recent move to the World of Coca-Cola.

Retrieved from "https://coca-cola.fandom.com/wiki/The_Coca-Cola_formula?oldid=7370"
Community content is available under CC-BY-SA unless otherwise noted.