This sugar-free drink originally began production as "Sugar Free Sprite" in 1974, and was renamed "Diet Sprite" in 1983. In other countries, it was known as "Sprite Light". Beginning in 2002, the name was changed in various territories to the current form. 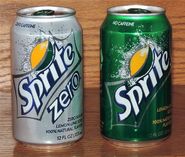 Community content is available under CC-BY-SA unless otherwise noted.