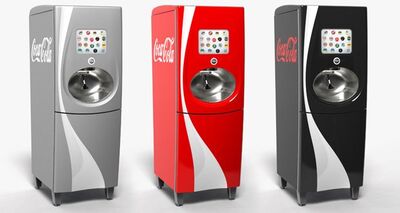 Coca-Cola Freestyle is a touch screen soda fountain introduced by The Coca-Cola Company in 2009. The machine features over 125 different Coca-Cola drink products. The machine allows users to select from mixtures of flavors of Coca-Cola branded products which are then individually dispensed. The machines are currently located in major Coca-Cola partners and retail locations as a part of a gradual and ongoing deployment.

The cabinetry was designed by the Italian automotive design firm Pininfarina, via their Pininfarina Extra industrial and product design subsidiary. Technologies involved include microdispensing technology and proprietary PurePour technology. Both technologies were originally developed to deliver precise doses of drugs. One Freestyle unit with a similar footprint to a current vending machine can dispense 126 kinds of carbonated and non-carbonated beverages from one freestanding unit.

Retrieved from "https://coca-cola.fandom.com/wiki/Coca-Cola_Freestyle?oldid=6910"
Community content is available under CC-BY-SA unless otherwise noted.